Peludópolis was an 80-minute animated film by Argentine director Quirino Cristiani. Released in 1931, it was the first animated feature film with sound.


Unfortunately, all copies of the finished film were lost in a fire, so the film is best known from this making-of featurette. If you get this post by email, you might need to follow this link to YouTube to see the video.

The film was made by a novel paper cut-out process. 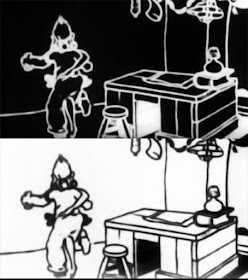 The characters and background elements were drawn with white paint on black paper. The paper cutouts were then laid out, and shot with a reversal process.
Peludópolis on Wikipedia
James Gurney at Thursday, October 20, 2016
Share