When the doorbell rang yesterday, Jeanette leaned into the studio and said, “Jim, would you get it?”

A silver BMW with spoke wheels had parked in the driveway. Two men with blue shirts were standing on the front porch.

I reached for my sketch pouch and stepped outside. The younger man said, “Are you concerned about the future?” 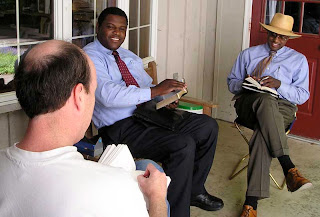 “Sure,” I said. I opened up some folding chairs and invited them to sit down. I asked the younger man if he would be willing to sit for a sketch, and he agreed. He opened his Bible and read the stories of Adam, Noah, Job, and Lazarus.

“According to Jehovah,” he said, “God is bringing this system to an end, and suffering will come to mankind.” 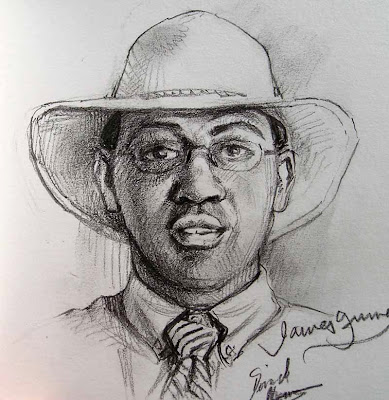 The older man followed along with his index finger in his own Bible. He glanced up from time to time to watch me draw. I was using a 4B graphite pencil. After I sharpened it a couple of times the pencil became almost too short to hold. The older man said, “I was wondering when you were going to get a new pencil.” 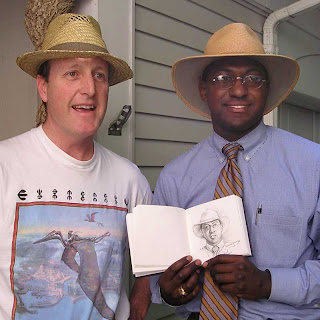 The younger man said that no one had ever sketched his portrait before. He brought out a camera and asked to take a picture of the sketch and of us together.

The older man reached into a leather case and handed me a book entitled "WHAT DOES THE BIBLE Really TEACH?" and "SHOULD YOU FEAR THE FUTURE?" They said they would be back again. I’ll have my watercolor kit ready.
James Gurney at Monday, May 26, 2008
Share