Souls on the Banks of the Acheron

In a 1900 edition of the Art Journal, Helen Zimmern described the scene in “Souls on the Banks of the Acheron” by Adolf Hiremy-Hirschl. 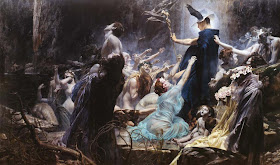 “In this picture we see the newly dead hovering on the banks of that river of the lower world which they must cross in Charon’s boat ere they reach their ultimate destination.

“Hermes Necropompos is here fulfilling his important function of conducting the shades of the dead from the upper to the lower world. In Mr. Hirschl’s rendering but few of these souls are glad to leave the sunlit earth behind them. Its joys and attractions still hold them spellbound, only quite a few, mostly young children and old men, are resigned to their mortal fate. 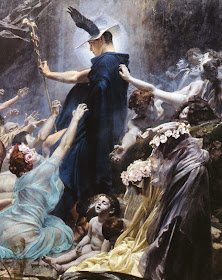 “The dissatisfied shades crowd around Hermes as he strides among them and implore him to relax his step, to stay the march of doom. But Hermes walks on regardless, with the calm inexorableness of a god, walks on and past the craving throng.

“But implacable though he must be to their entreaties, he is not here depicted as deaf and insensible to their sufferings. It is this that gives to his figures a sympathetic grandeur. 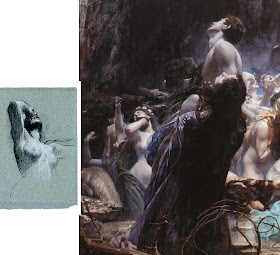 “In the middle distance Charon is seen approaching in the boat that shall row these souls to their final abode. It is the sight of his barque on the black waters of the Acheron that has struck the multitude with such terror. The dread passage once made, all hope is ended.”

Adolf Hirémy-Hirschl, Hungarian, 1860–1933. Souls on the Banks of the Acheron, 1898. Oil on canvas, 85 x 134 in.
Vienna, Österreishische Galerie Belvedere.
This painting is reproduced as a double page spread in Color and Light: A Guide for the Realist Painter