The CIA funded abstract art during the Cold War

Former CIA agents have admitted what investigators have long suspected: that the US Government used taxpayer money to promote abstract painting as a propaganda weapon during the Cold War. 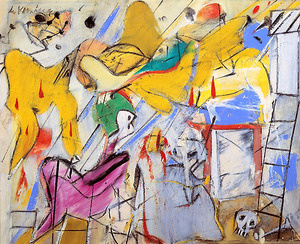 During the 1950s and '60s, the same period when the USA was building up its arsenal of nukes, it decided to use art against the Soviets to proclaim American cultural superiority. 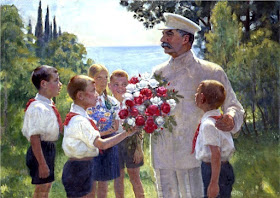 The idea was initially tested in the open in 1947 by the State Department, which launched a program called "Advancing American Art." The centerpiece was a group of 79 avante-garde paintings purchased with $49,000 of government funds. Over the next two decades, several exhibitions of Abstract Expressionism were organized, including one called "The New American Painting," which traveled at government expense throughout Europe in the late 1950s. Other shows included "Modern Art in the United States" and "Masterpieces of the Twentieth Century."

Cracks in the program formed fairly quickly. Critics began attacking the artwork as “un-American” and “subversive.” The paintings were ridiculed in the national media and in Congress. President Truman, summing up the average American's opinion of the work, said, "If that's art, then I'm a Hottentot." A congressman complained, "I am just a dumb American who pays taxes for this kind of trash." Look magazine ran an article entitled “Your Money Bought These Paintings.” The chairman of the House Appropriations Committee wrote an angry letter to the Secretary of State, George C. Marshall.

Facing such criticism, the program then went underground, and the CIA devised a new strategy. Millions of dollars were channeled through fake foundations and intermediate organizations with names like the Congress for Cultural Freedom, the International Organizations Division (IOD), and the Propaganda Assets Inventory, which could influence more than 800 newspapers, magazines and public information organizations.

According to former case officer Donald Jameson, these organizations enlisted sympathetic critics, collectors, curators, and museums—most notably Rockefeller's Museum of Modern Art—and swore them to secrecy. The artists themselves were unaware of the source of the the support. The fact that the US was using covert means to promote the ideals of cultural openness was an irony lost on the planners.

As time went by, criticism for the exhibitions mounted, and it became clearer that many of the artists themselves were ex-communists, not exactly the sort of people that the US government wanted to back during the McCarthy era. The paintings that had been purchased by the government were recalled by Secretary Marshall and sold as scrap. They yielded a sum total of only $5,544. Many canvases sold for $100 or less and found their way into public universities.

Sources and further reading:
CIA's official explanation of the Congress for Cultural Freedom
Independent: Modern art was CIA 'weapon'—Revealed: how the spy agency used unwitting artists such as Pollock and de Kooning in a cultural Cold War
Gizmodo: How the CIA Spent Secret Millions Turning Modern Art Into a Cold War Arsenal

" by Taylor Littleton and Maltby Sykes