. But I’ve always wanted to do a demo for you so that you can see how it actually works with a specific image. 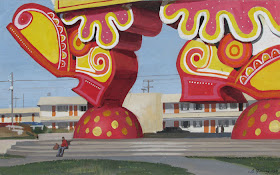 So for this three-post series, we’ll have some fun with the method. Let’s start with the final results, so you can see where we’re heading. Above is a plein air painting of the colorful Circus Circus sign in Las Vegas, painted in gouache.

It has intense local color to start with, and it’s lit by a midday sun from in front. And there’s not much hazy atmospherics. So most of the colors that I used in the painting are pretty close to the local colors I was looking at. 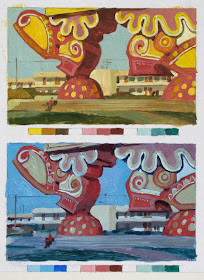 Suppose that later on in the studio you wanted to shift the color scheme in one direction or another, similar to the digital method called “color grading” in film. Of course in Photoshop, you could just move a few sliders around, but how would you do it in paint?

You could shift the color by using a very limited palette of tube colors. But that’s an inexact method because you’re limited to the available pigments. A better method is by premixing within a specific gamut that you select, and I'll explain more tomorrow.

From Mask to Palette (2008)
Color and Light: A Guide for the Realist Painter